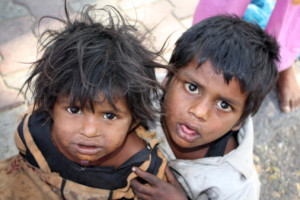 The last dinner plate is loaded into the dishwasher. My husband, Dale, and I fill our mugs with tea and head up to the bonus room over the garage. This is our evening refuge. Instead of TV, we read, study, research, plan, and catch up on the things that matter most to us. It’s a comfortable habit.

I’ve agreed to be part of the launch team for a new book by Gary Haugen, the president and founder of International Justice Mission (IJM). It’s called, The Locus Effect: Why the End of Poverty Requires the End of Violence.

The book arrives earlier in the day and after the entire buzz from the launch team, I am ready to read it. I already know it’s going to be filled with heartbreaking stories of injustice and they begin immediately on page two.

I ask Dale if I may read one of the stories to him. He stops what he’s doing so he can focus and listen.

“The little girl’s name was Yuri, and one early morning somebody had dumped her crumpled body in a small pool of blood and gravel in the main street – her skull crushed, her legs still wrapped in wire cables, and her panties bunched around her ankles. The perpetrators hadn’t even bothered to dump her body a few feet away in the river that rushed with mountain speed through the center of town.

A girl so young, so openly and horribly murdered, so casually left to be taken out of with the city’s morning trash – maybe this one grotesque assault in La Union would tell the world something about the hidden violence rolling with quiet devastation through the lives of Peru’s weakest and most vulnerable.

Entering into the depth of this one terrible story would not be easy. However, and would take me into the surreal intimacy, cruelty and in your- face-corruption of murder in a small town – where everybody knows everybody. Where everybody knows exactly what they’ve done to whom, where guild and innocence pass one another in the street and where the strong mock the weak over generations.”

I stop reading and break the silence when I say what we both know to be true, “Dale, that could have been Sania’s story.” At this point, all he can do is nod.

The little girl we are adopting from Haiti easily could have met the same end as Yuri. Abandoned in the darkest and most impoverished slum in all of Haiti, the only difference is our Sania lived long enough to be rescued. Unable to shake that truth, we mourn Yuri from Peru and share a deeper ache to bring Sania home from Haiti.

Sometimes it takes an extraordinary event for us to clearly understand realities that are grossly dark and uncomfortable. To stand face-to-face with evil, requires super-natural courage and an absolute faith that when God says, “I am with you always,” He means it.

I pray you are willing to find the courage to reach uncomfortable. I pray you will stand with our Liberating King and do whatever He calls you to do. I pray you will take another step towards being part of His purpose in this world. Today I want to encourage you to do these two things:

1. Buy the book, The Locust Effect. It releases this week. It will bring you to uncomfortable and help you understand the reasons why our Long Hollow leadership team is passionate about actively taking a stand against the poverty, violence, injustice and evil inhabiting this world.

2. Register for the Women’s Momentum Event on 2/16. Come to this gathering and join us on the quest of forging freedom. Listen as the Spirit uses Christine Caine to bring us the message He wants us to hear.

Speak up for those who cannot speak for themselves, for the rights of all who are destitute. Speak up and judge fairly; defend the rights of the poor and needy.

Excerpt in bold from The Locust Effect: Why the end of poverty requires the end of violence by Gary Haugen, founder & president of International Justice Mission. (Oxford February 2014)