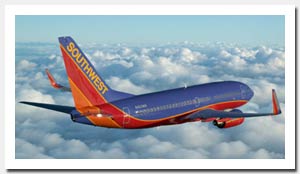 “Southwest! There it is. Pull in quick before someone else gets it!” I said. We were late…very late. After unwillingly throwing ourselves into the early morning surge of commuters, we arrived at the airport without a minute to spare. Before getting our boarding passes, we knew we had to turn in all eleven of our television production gear cases to baggage claim services. Hastily, with clammy palms, we slung our tickets and licenses onto the counter, hoping that the agent would hear our urgency. The slow, sluggish clicking on the keyboard let us know, however, that he did not share our distress. The tilt of his bifocals and the look in his eyes spoke to me saying…my morning coffee break is four minutes away whether you board this flight or not. We stood silently and watched. We feared any distraction from us would cost us precious seconds. I began to think that we were not going to make our flight.

“And… eleven. That’s it. Yo-o-o-u’re set.” Before he could finish his sentence, we were off the curb and back into the car. We still had to park the car, ride a shuttle bus back to the concourse, make it through security, find our gate, and get our boarding pass. Three rows down from the bus stop we slipped into what appeared to be the last parking space left in the airport. While dragging two computer bags, my purse, and my jacket, I prayed that a shuttle bus would come soon. What if we just missed it?

Just as I lowered the heaviest bag from my aching shoulder to take a breath, I heard the bus rounding the corner. Without hesitation, back on the shoulder the bag went; and up the steps we trudged, mentally focusing on not tumbling backwards underneath all of our bags. We made it. Our next step was checking in and getting through security. Would this be the day that they decide to search all of our bags? I shuttered. Don’t think about it. Just focus. We might still make it… we might. 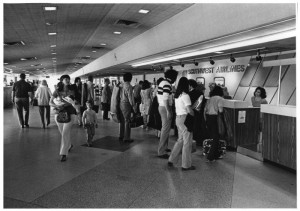 After successfully making it through the security gate, we bounded to the nearest departure board and began to line up airlines with cities, cities with times, and times with gate numbers. Just as the slightest glimpse of hope began to creep into my mind, I came to our gate number…29. Out of 32 gates, our flight was leaving from gate 29!

“We’ve made it this far, we have to try,” my husband said half-heartedly. With my jacket draped over my rolling bag, I threw the other bag onto my shoulder, in an effort to relieve the blood-red indentions I had made in my hands. Every time we saw a clearing in the crowd, we’d dart ahead through the endless corridor…12…13…19…20. We were getting closer. We have a chance…might just make it now!

“There’s the crew. They’re waving. They’re waiting on us.” Even though they were at the very end of the long corridor, we knew we were safe. We made it after all.

Panting, sweating, and by now, laughing, we reached the gate. I reached down to pull out my ticket…and…what…no…where’s my…my…purse? My purse was gone! The shuttle bus…the security gate…somewhere in the corridor…it could be anywhere! I stopped. Filling with tears, I closed my eyes as my bag fell to the floor.

“Ma’am…is this yours?” I looked up to see a middle-age man, just as out-of-breath as we, holding my purse high up in the air as he sprinted towards me. “You left this on the shuttle bus. Just wanted to make sure you got it back.”

Knowing that everyone on the plane was waiting on us, all I could do was express a simple “thank you” to the man. I never saw him again. I asked myself that day…would I have run all the way to the other end of an airport to help a complete stranger the way he did? If I had been in this situation, would I have claimed it as my responsibility or would I have dismissed it as someone else’s? I can only hope that someday I’ll be given the chance to answer “yes” to that question, just as he did.

“The only thing that counts is faith expressing itself through love.” Galations 5:6