“And suddenly there came from heaven a noise like a violent rushing wind, and it filled the whole house where they were sitting.” Acts 2:2

On the final evening of our time in Haiti we experienced what would be recognized as an unusual weather event. As we sat in Pastor Dony’s house, which sits upon a bluff above the coastline of the Caribbean Sea, out of seemingly nowhere there came gale force winds off of the ocean. It didn’t begin subtly, but rather suddenly and with force!  As we listened to the pastor share with us their calling and vision for Haiti and the orphans of Haiti whose care they’ve been entrusted with, we all struggled to remain attentive in the midst of such tumultuous winds! Being very tired at week’s end along with many of our team suffering from a Haitian stomach souvenir that was seeking to tag us all, most of us would have to admit the wind’s greatest distraction was to fill us with the fear of not being able to fly out in the morning on the small aircraft that would take us back to the Port Au Prince international airport! 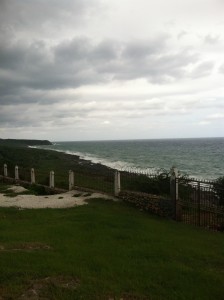 We expected that it was surely raining outside, as well but as we left the house to return to our guest house a couple of hundred yards down the hill, and nearer the ocean, there was no rain; just those ominous gale force winds, and stars in the Caribbean sky.

The temptation for me was to think that this was some kind of act of spiritual warfare that would prevent what we all were very ready to do, head home!  But wait……as scriptures came to my mind I thought, how could that be? For it is God who is the maker of heaven and earth, whose lightning goes to the ends of the earth and who says to the snow, “fall on the earth”. It is from the breath of God that the ice is made! (Job 37) It is He who caused a wind to pass over the earth, and the water subsided! (Gen 8:1) It is the Lord who rebuked the winds and the sea, and it became perfectly calm. (Matt 8:26)

So it was the Lord who swept over us with a mighty rushing wind that last night in Haiti, but why? As I still dwell on the residual feeling of sitting in the midst of that wind, such a visual, physical and auditory experience in which the heavy hand of God and the weight of His glory was felt, I am certain that we were the benefactors of God’s gale of grace!

As mentioned previously, what was going on that evening was that a large number of the team was experiencing some illness. A house without air conditioning and bunk rooms with as many as eight to a room, tropical heat and humidity, and a lack of ventilation would have surely increased our discomfort, and threatened to steal our joy on that last night! That wind blew so strong that it passed from the front of the house through the back, from bedroom window to bedroom window and every crack in between, bringing with it a cleansing that could have come no other way. But that wind also reminded us to pray believing that it is He who says to the storm, “Peace, be still”. Fear had appropriately turned to awe! Maybe that wind was just to remind us of who it is that we worship, and in whose Name we came to serve! Or maybe, in His infinite grace, it was the Father saying of our time in Haiti, “Truly I say to you, to the extent that you did it to even the least of them, you did it to Me.”

Those gale force winds blew all through the night and into the morning. But by the time it came for us to take flight out of Jeremie on those small aircraft, God had surely said “Peace, be still” and we were bound for home and indebted again to Him for grace….in which the only payment He desires or asks is to praise Him and glorify His name. Thank You, Father!