In whom do you trust?

Take a few minutes this morning and really consider that question?  When things in your life seem hopeless, out of control, too great, or you simply feel like you’ve run out of options, where do you go?  It’s different for all of us, but I’m willing to bet that you’ve faced a situation at some point in your life that seemed too big to handle.  We’ve all stood at the base of our mountain looking up to the sky, and thought, “there’s no way I’ll ever reach the top in one piece, let alone make it to the other side.”  If you’ve been there, then take courage…we have a mighty God that saves!  Take a few minutes to meditate on the following verses from the book of Psalms, and ask God to strengthen you this morning.

“Some trust in chariots and some in horses, but we trust in the name of the LORD our God.  They are brought to their knees and fall, but we rise up and stand firm.” (Psalm 20: 7-8)

My prayer for you this morning, is that no matter what mountain you’re facing, you will be encouraged to trust in the name of the Lord. 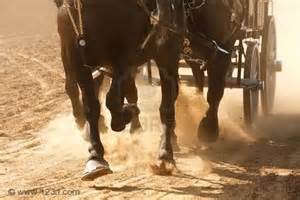 When we last left Hosea, he was in the middle of an amazing act of obedience to the Lord.  At the Lord’s command he married Gomer, an adulterous and unfaithful woman.  She ended up having three children-Jezreel, Lo-Ruhamah, and Lo-Ammi-whom we’ll see next week, had very significant names.  Our study for today however, is focused on one teeny verse thrown in the middle of all the child-bearing drama.  One verse, we’ll see, that has the power to encourage and strengthen our faith in a mighty way.  Go ahead and read Hosea 1:7 below:

“Yet I will show love to the house of Judah; and I will save them-not by bow, sword or battle, or by horses and horsemen, but by the Lord their God.” (Hosea 1:7)

Now in order to completely understand the story, you have to understand that Hosea was prophesying to the Northern Kingdom, or Israel.  We learned last week that they were doing evil in the eyes of the Lord and had turned to other “gods.” While all of this was occurring however, the Southern Kingdom or Judah, was doing their best to stay strong under the leadership of King Hezekiah.  In 2 Kings 19, King Hezekiah pleads with the Lord to save them from the Assyrians and not let them fall.  It looked bleak, but he had faith that the Lord could deliver them.

I think sometimes we forget that a lot of Scripture overlaps, and that it’s not necessarily in chronological order.  While King Hezekiah was in the south praying for protection, Hosea was in the north desperately pleading with the people to turn back to God.  Now read Hosea 1:7 one more time and let all of this sink in.  God declares to Hosea that the Northern Kingdom, Israel, is about to fall…Judah however will be saved.  And not only would they be saved, but they would see His power!  He would save them by a way unknown to man-not by fierce horsemen, swords, or the strength of man-but by the miraculous power of an all-sovereign God.  I don’t know about you, but that is super encouraging to me!

The Lord that proclaimed to Hosea that He was strong enough to save an entire nation, is the same God that hears our prayers.  Think about that for a moment.  What are you facing that seems too big?  What are you trusting in that will ultimately fail?  While it may not be horsemen or fierce chariots, perhaps it’s your position, talents, money, or own feelings of control.

Praise be to God that we serve the One who is bigger than those things!  When the world trusts in itself, we can place our hope in a God that saves in mighty ways!  May we live lives that reflect this hope that we have.  Then, like the Psalmist says, we may rise up and stand firm in the midst of our greatest battles.  Thank Him for that this morning.