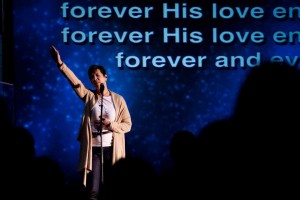 Worship wars.  Those two words put together make me shudder.

Traditional vs. contemporary.  Hymns vs. choruses.  Neckties vs. t-shirts.  Robed choir vs. praise band.  “Us” vs. “Them.”

He was a godly man from whom I learned much about Jesus, Scriptural truth, and, yes, worship.  He didn’t feel appropriately dressed to enter God’s house unless he was wearing a suit and a white dress shirt.  That, to him, was a way to show reverence.  I loved to hear him pray, too.  He prayed using the poetic language of the king’s English; the “Thees” and the “Thous” were one more way in which he showed reverence.

Would he have ever raised his hands in church?  Nope.  In his day that would’ve seemed to be too “emotional” (even though Scripture says we are to “lift up holy hands,” he wouldn’t have felt comfortable in doing so).  Would he have clapped at church, whether as a worship response, or in joy following someone’s baptism?  Nope.  Even though Scripture says that the “trees will clap for joy,” or if we fail to praise Him “the very rocks will cry out,”  but to him, clapping would have felt the same as being at a ballgame.

You might recall the book The Five Love Languages, written by Dr. Gary Chapman.  Several years ago I told my (then) minister of music that if worship was our love language back to God, my language wasn’t spoken in that church.  While I certainly don’t believe corporate worship is “all about me,” I do believe that part of the connection in worshiping Him in “spirit and in truth” is the ability to express your praise, love, and adoration for, and your confession to, Him in your “love language.”

I grew up in a traditional Southern Baptist church, the same church where my grandfather had long served as a deacon and choir member (“retired” at age 90).  I’m truly grateful for the rich history and legacy I received in being raised in the faith there.  I learned deep biblical truths from hymn texts, and was inspired by the service of faithful folks, like the lady who was our church organist, a role she had for 50 years.

However, I never felt free to raise my hands as a response in worship.  It just wasn’t done.  I was afraid that people would think I was trying to appear too “spiritual,” too “holy.” Would they have really thought that?  I don’t know.  But what I was guilty of doing was quenching the Spirit.  The first time I was obedient in raising my hands was while singing in the mass choir at the last Billy Graham Crusade at LP Field.  I figured no one would notice me (and judge me) in a choir of 5,000.  I felt free there to “speak” my language.

Is lifting your hands a requirement of sincere worship?  Of course not.  Is it a legitimate response?  Absolutely.   Was my grandfather’s attitude wrong?  I certainly don’t think so.  It was cultural.  And that still exists today.

One time a Methodist friend told me how worshipful she found liturgies to be.  That’s beautiful!  Me?  My mind, my heart, my spirit seem to best connect with God in music—and, specifically, contemporary-style music.  It’s my love language.

So, please, for the sake of the kingdom and those we influence, let’s not continue to combine the words “worship” and “wars.”   Just think of it as a language difference.